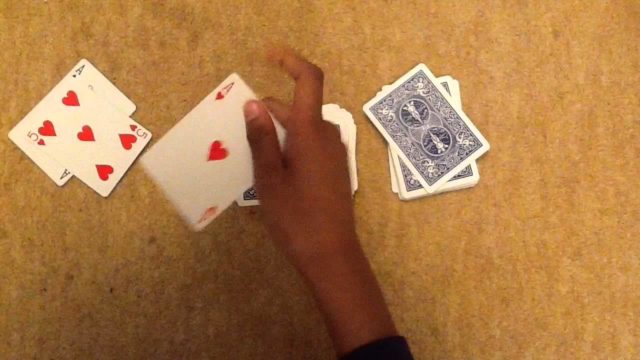 Hello again everybody a lot of people have been sending me Emails and asking me to make tutorial about power of four card trick.

This one I really like it’s an important mentalism card trick for beginners and it had me stumped.

So the card trick is created by the Robo for one for has 71 uploads. Most of his videos have less than 100 views. He does a lot of card trick tutorials this trick that he created is called the power of Four.

Let me show you now how you do power of four card trick. It is an important trick and I think it is brilliant.

I’ll be wondering what that false cut was all about because you’re clearly mixing the cards. Now what you want to do is you want to take the cards you want to spread all the cards so they can check that they’re in no particular order what you’re doing.

Now you are going to memorize the card in the fourth position. watch video below so that you understand how it is going to work.

watch the Video Below for More Visual Demonstration.

so it’s these simple easy card tricks that I’m really impressed with because some of them are magician Fuller’s. Some of them I can’t even figure out.

so let me know what you guys think.Did you figure it out do you like it? check out our other tutorials.

You Might Enjoy This Tutorial: How to Do Double Lift